Are you thinking about following the keto diet plan? Is the Keto diet good or bad for you?

So many opinions are shared online. One friend follows the keto diet with success while another one brags about a high carb diet and their health benefits.

So what should you believe?

What is the healthiest of all diets?

As I discovered more and more people following the keto diet, I knew it was time to start thorough research. Before you read on I would like to emphasize that the purpose of this article is not to battle about Keto vs. Vegan, or low carb vs. high carb with only my opinions. The choice to eat any food is yours alone. I just want to provide detailed science and research for you to make an informed decision.

Scientific research has been around for almost 100 years showing the effects of (high) fat and carbs for health and weight loss. I would like to give you a clear understanding of what science has shown concerning health and weight, so be sure to read all the provided studies for yourself before believing any online influencer and/or popular media sites.

What is the Keto Diet?

The theory behind this approach is that after cutting out carbohydrates, your body relies on the fat storage in your body to burn for energy. The byproduct of burning that fat are ketones, therefore your body is in a state of ketosis.

Why do people choose the Keto diet for weight loss?

A diet where you can eat cheese and bacon and lose weight does sound appealing to a large group of people. Thinking about reaching ketosis to melt all that fat on your body makes sense for many.

But is this even true?

Many people have tried the ketogenic diet, reached ketosis, and lost weight. But here is where I have to disappoint you if you are thinking about trying the keto diet for weight loss or for getting healthier:

Concerning weight loss the Keto diet doesn’t perform any better than other diets (weight watchers, portion control, Atkins,..). Concerning your health and safety, Ketosis is a terrible state to be in.

The Danger of Ketosis

If you are in ketosis your body is depleted of carbs, therefore burning fat for energy. Here is how your body should work:

Carbohydrates are made (by the plant) from carbon and water so when we eat the plants and burn the carbohydrates they break back down into water and carbon fueling us with energy in the process. It is easy for our body to “shed” these byproducts (breathe the carbon out).

Sounds like a natural process, as if our bodies were made to process carbs, right?

Therefore, carbs are our body’s preferred source of fuel. However, our body is also capable of using fat for energy in case of emergency (secondary energy source). We can burn fat to get energy but in a more complicated way. The byproduct from burning fat (during ketosis) are acidic ketones that our body then has to get rid of. The body also loses a lot of water because it needs to flush out those toxic ketones. That is also the reason why people experience bad breath, smell funny during the keto diet (toxic by product), and have to drink lots of water. You risk diabetic ketoacidosis as a result of your body switching to fat as an energy source:

“Diabetic ketoacidosis is a serious complication of diabetes that occurs when your body produces high levels of blood acids called ketones.”(source)

So, during ketosis you trick your body into a fasting (or starving) state, but it is also a sick state to be in (for example, cows die when they are in ketosis).

The acid that comes with these ketones is actually very bad for your body. It can destroy bone mass and cause kidney stones. Even children experienced kidney stones while on a keto diet (source).

Some keto dieters call it the “keto flu” when you feel dizzy, nauseous, unfocused or energy deprived during the keto diet. Well, your brain’s preferred fuel for energy is glucose (from carbohydrates). However this study shows that the produced ketones during starvation can fuel up to 2/3 of a starving brain, and the rest has to be glucose (which can be converted from fat and protein)

This might be one of the reasons why you have brain fog during the ketogenic diet.

The accumulation of fat inside your muscle cells interfere with the action of insulin, meaning that insulin is not able to bring the sugar out of your blood and into your muscles for use as energy (insulin resistance)(source). High insulin levels are associated with diabetes, acne, heart disease, and more.

Of course, high sugar makes this situation worse, but clogging your arteries with (saturated) fat will inhibit your insulin from doing its job in the first place. A study done by Sweeney in 1927 (Sweeney js. Dietary factors that influence the dextrose tolerance test. Arch Intern Med. 1927) shows the insulin resistance levels when given dextrose twice in one hour on each diet.

Clearly the high fat diet showed most insulin resistance levels and the carbohydrate diet had the least spike and levels over time.

The same study also showed an interesting correlation: The higher the fat and lower the carb, the higher the blood sugar spike (see below).

Just to back up these findings: Another research group infused fat into individuals’ bloodstream and insulin resistance increased significantly (source).

Now what happens if you lower the fat in the blood?

The sugar in the blood as well as insulin resistance lowers immediately:

“We conclude that lowering of elevated plasma FFA levels can reduce insulin resistance/hyperinsulinemia and improve oral glucose tolerance in lean and obese nondiabetic subjects and in obese patients with type 2 diabetes.” (source)

In a 1997 study, scientists tested the insulin response between an apple, 1 cup of oatmeal, 1 1/2 cup white flour pasta, a bunless burger (with no carbs), and 1/2 salmon filet. Turns out the meat had the highest insulin response!

So if you only need to create a caloric deficit to lose weight, you might as well pick the healthiest diet out there.

Another huge weight loss mistake is following fad diets like the keto diet. Even if you decide to go keto for only 30 days, what happens after?

This study showed that the body fat lost during the keto diet slowed compared to the high carb diet and weight loss was occuring on fat-free mass (water, muscle,.). So when you stop the Keto diet after a while you will most likely gain the water weight back!

Turns out a high carb, low fat diet performs better for losing fat. That’s what you want to lose: fat, not your organ mass, muscles, and water.

The keto diet was actually used to decrease frequency of seizures from epilepsy. What isn’t shared regularly is that 2 CHILDREN died from selenium deficiency and heart rhythm disorder (read evidence here). Another 9-year old child suffered acute pancreatitis while on the keto diet and then had a heart attack and died (source).

“One patient with severe dilated cardiomyopathy and prolonged QTc normalized when the diet was discontinued.”(source)

Even if you compare fit people, this study of athletes found a lower blood pressure in vegan athletes than meat eating athletes.

Also consider that over half an egg a day increased heart disease risk between 6 and 40 percent, and 29 percent risk of diabetes (source).

Alternatively, daily consumption of 3 portions of whole-grain foods can significantly reduce cardiovascular disease risk in middle-aged people mainly through blood pressure-lowering mechanisms (source). The result is nearly the same benefits from symptom reducing drugs (but without side effects).

In fact, people who consumed 3-5 servings of whole grains a day had a ~26% lower risk of type 2 diabetes,  ~21% lower risk of cardiovascular disease, and consistently less weight gain during 8-13 years. (source)

Nutrition of a Keto Meal Plan

You can use cronometer to track your nutrition on any diet. I use this tool to make sure I don’t run any nutrient deficiency. So I took this keto menu from healthline and logged it into my cronometer. I used the plan for Monday and assumed that it means one porkchop for the dinner. In the image below you can see what I added.

As you can see the carb percentage is at 19%, which means ketosis may not be reached. Then, this plan provides 1108 calories. Weight loss occurs when you have a calorie deficit. Average daily calories for an adult is typically around 2000, and anything below 1200 can be dangerous. Let’s look at the vitamins and minerals.

This diet is very high in protein, saturated fat, and trans fat. It provides great values in selenium, vitamin A, K, and B2. Other vitamins and minerals provided by this diet are lacking, including very low fiber.  If I double eggs, butter, burger, cheese, and pork chop to bring the calories up a bit there are still deficiencies in necessary vitamins and minerals.

Now you would have 1889 calories, which is near the normal range. All the B vitamins are great, but what about folates, vitamin C, E, Calcium, Copper, Iron, Magnesium, Potassium, Fiber, and Omega fatty acids?

For comparison, below is a vegan 1700 calories meal plan for weight loss and the nutrition you will get with it. 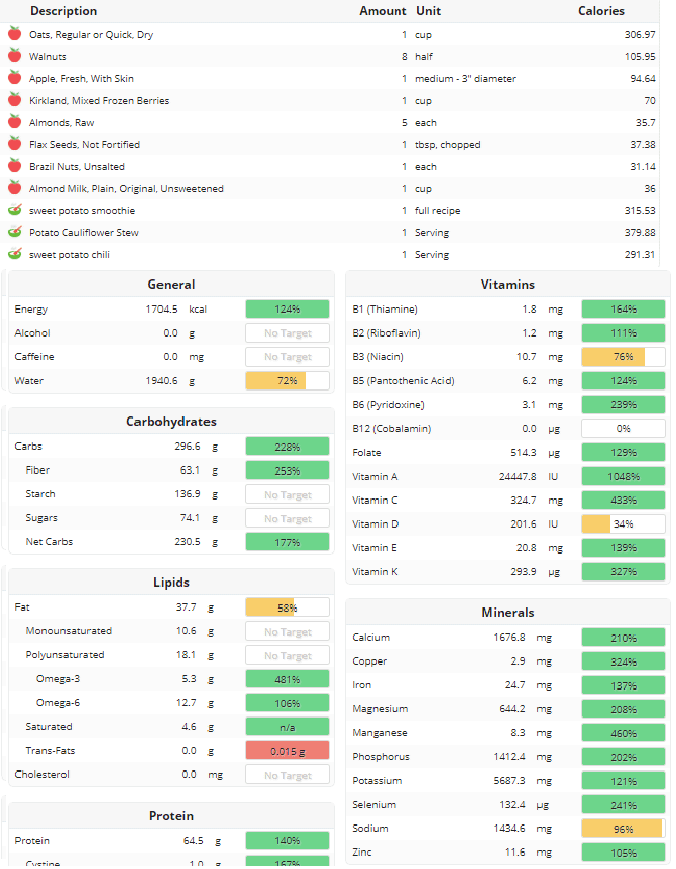 If the keto diet is not safe or healthy why does it work?

I hope that, by now, you read all the scientific evidence proving the point that high fat consumption and the keto diet is not healthy at all.

You can, however, lose weight on it because you run a caloric deficit and you cut processed food out of your diet. You could potentially see improvements in diabetes because of weight loss results, but not because the diet is healthy. In general, weight loss will help with blood sugar issues.

BUT on a low carb diet you can only suppress the symptoms of diabetes (avoid blood sugar spikes) and the moment you eat carbs your blood sugar will cause problems. This means you are still diabetic. On the other side a whole food plant based diet was proven to reverse diabetes, to the point where you can eat carbs and will not have any health issues (actually heal diabetes).

Losing weight is more than just following a specific fad diet. It is about finding a healthy lifestyle that is sustainable for the rest of your life. Only then weight loss will be successful: creating lasting healthy habits.

Lisa is the creator of 2sharemyjoy.com and the author of Plant Powered Health. She earned a Master’s degree in sports education and also earned a certificate in vegan nutrition. Lisa uses her education to analyze nutrition research and turns it into a practical approach for her audience. Her readers enjoy her well-planned easy vegan recipes and meal plans. Read More…

Please note that 2sharemyjoy.com has relationships with certain merchants mentioned. Affiliated links may be shown in the posts and commission may have been received.

I stand in a relationship with Amazon Services LLC Associates Program and use their affiliated links. This means that some of the links take you to Amazon.com where you can view and/or purchase a recommended item. As an Amazon Associate I earn from qualifying purchases.

Information presented on 2sharemyjoy.com is intended for informational and entertainment purposes only and is not meant to be taken as health advice. This blog is not intended to treat, cure, diagnose, or prevent any disease. It is not a substitute for medical advice from physicians. Consult your healthcare provider and follow all safety instructions before beginning any exercise program or nutrition plan. The views expressed on this website are personal opinions only and should not be construed as health advice for your given situation.